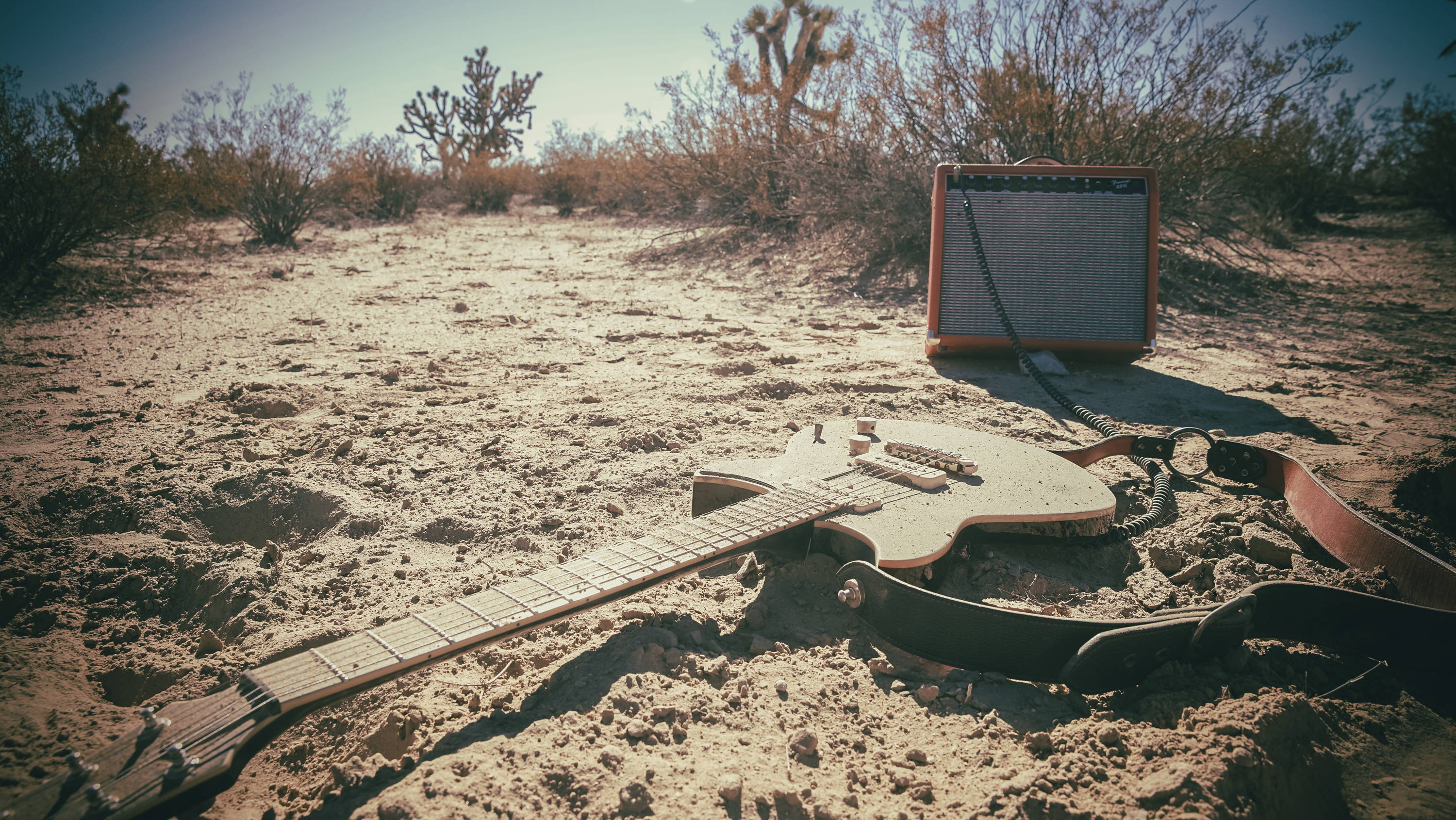 If Los Angeles is the city of Angels then the Mojave Desert is her Dark mistress. Hot, seductive and mysterious on one hand and cold and dangerous on the other. She holds secrets that many men have gone in search of, some never to return. The Eagles, The Doors and The Band all went in search of her magic and muse and shaped a generation. The Mojave indigenous people would take Devils weed and wander her endless plains as a right of passage to achieve a new state of consciousness. But we… We are a different breed… we seek wilder things… not just to wander, but to conquer. We seek to achieve a new consciousness only one way, we ride.

On paper it looks simple, three friends, four days, four stops, four amazing adventures! And as a professional musician, travel is pretty standard fair. After 15 years of making records and touring the world I would hope I got this travel thing down! Just book your flights from Northern Alberta Canada jump on some British Customs Triumphs from our friends at International Motorsports in Vancouver and go for a ride right? Wrong! On the map Los Angeles, to Joshua Tree National Park, to Las Vegas, to Death Valley, back to L.A looks like four easy days of riding. But we found out nothing is easy in the desert and you never know what you will get one day to the next! 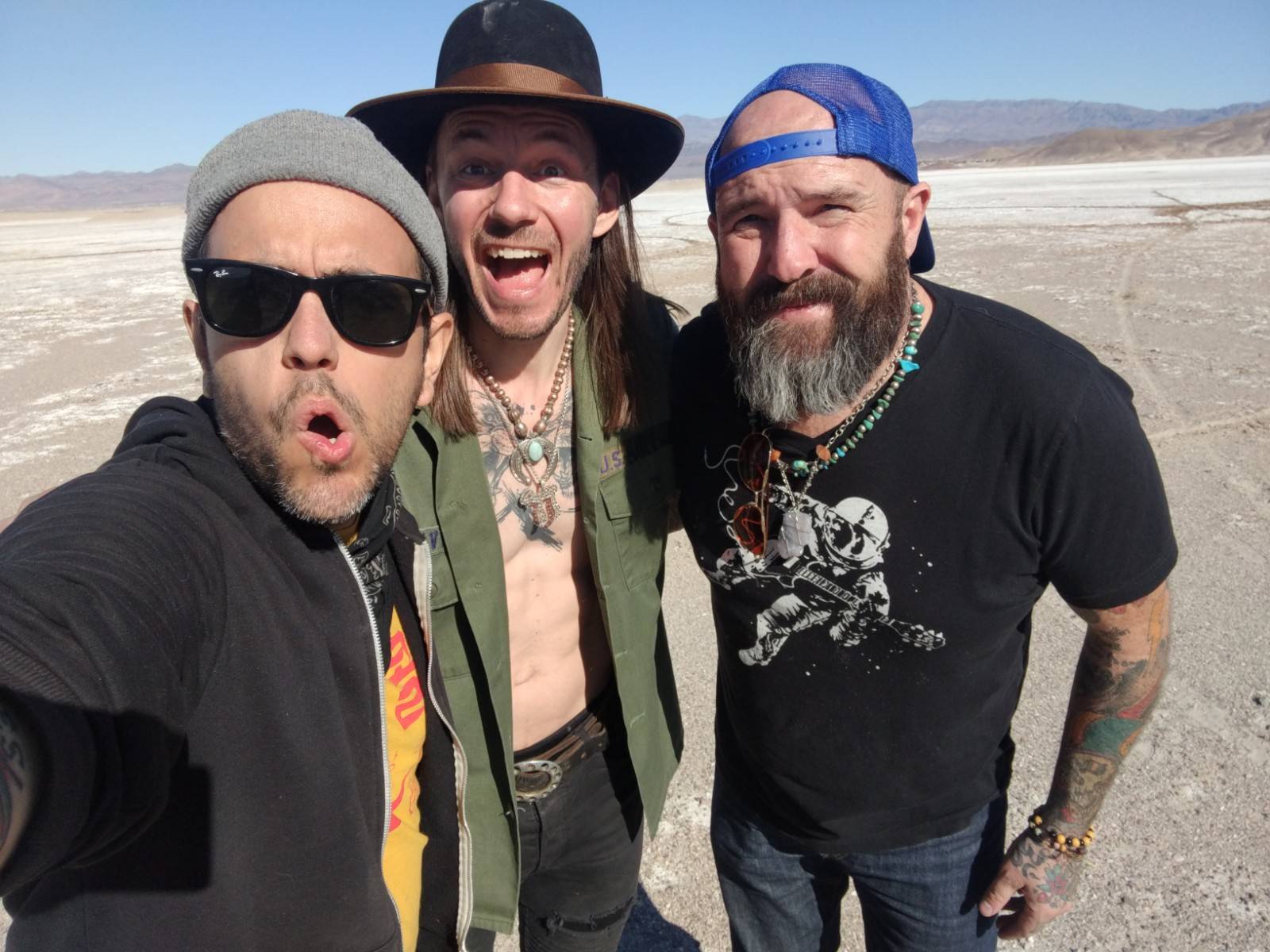 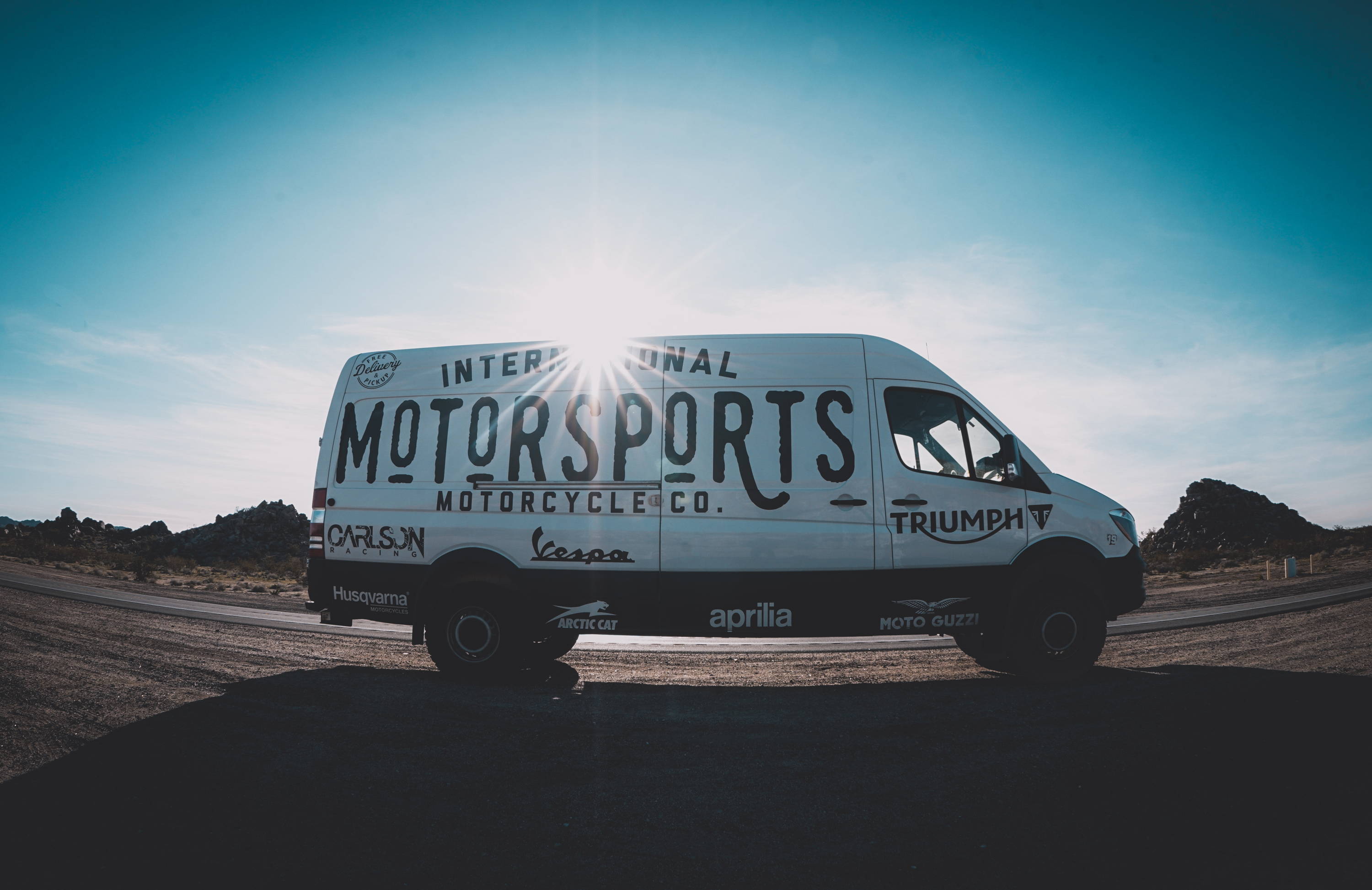 One the first day I landed in L.A. and met up with my friends Zach Graham owner of International Motorsports and Travis Nesbit videographer and filmmaker. We were fired up to shoot some music videos for my new Band The Congregation and have some fun! We hit the road with a vengeance, ready for our spiritual awakening. With all the fanfare and bravado of young braves ready to accept our trials and claim our manhood! Only we didn’t realize what dangers lay ahead.

The temperature that day was 55 Fahrenheit and a nice departure from the -23 celsius in Canada. But with a 30 mile an hour wind on the back of my T-120 I was hard pressed to find any comfort in the California sun. We rode out of the city leaving the last vestiges of safety, out into the wilderness and the mystery of Joshua Tree. The ride there for the most part was probably the most dangerous. Navigating the five lane freeway drivers and the high speed lane splitters that were so foreign to us as Canadian riders. What we though would be an easy two and a half hour ride quickly turned into four with the L.A. traffic escaping the city core for the weekend. Not only did you have to contend with the nervous drivers but the lane splitting bikers we were NOT used too! But as soon as we left the main roads civilization started to melt away. And by dusk we were winding up a mountain road into Pioneer town and the infamous Pappy and Harriets. Formed in 1946 Pioneer town was built as a living movie set, home too over fifty feature films with a stage that has hosted legends from Paul McCartney to Robert Plant. The smell of the bbq and the hippie rock n roll coming from the bar was a welcome blast to the senses after the long cold ride. We ate and drank our fill and made quick friends with the band which turned into a late night jam session that meandered early into the morning hours till we retired to our rustic lodgings in Pioneer town. 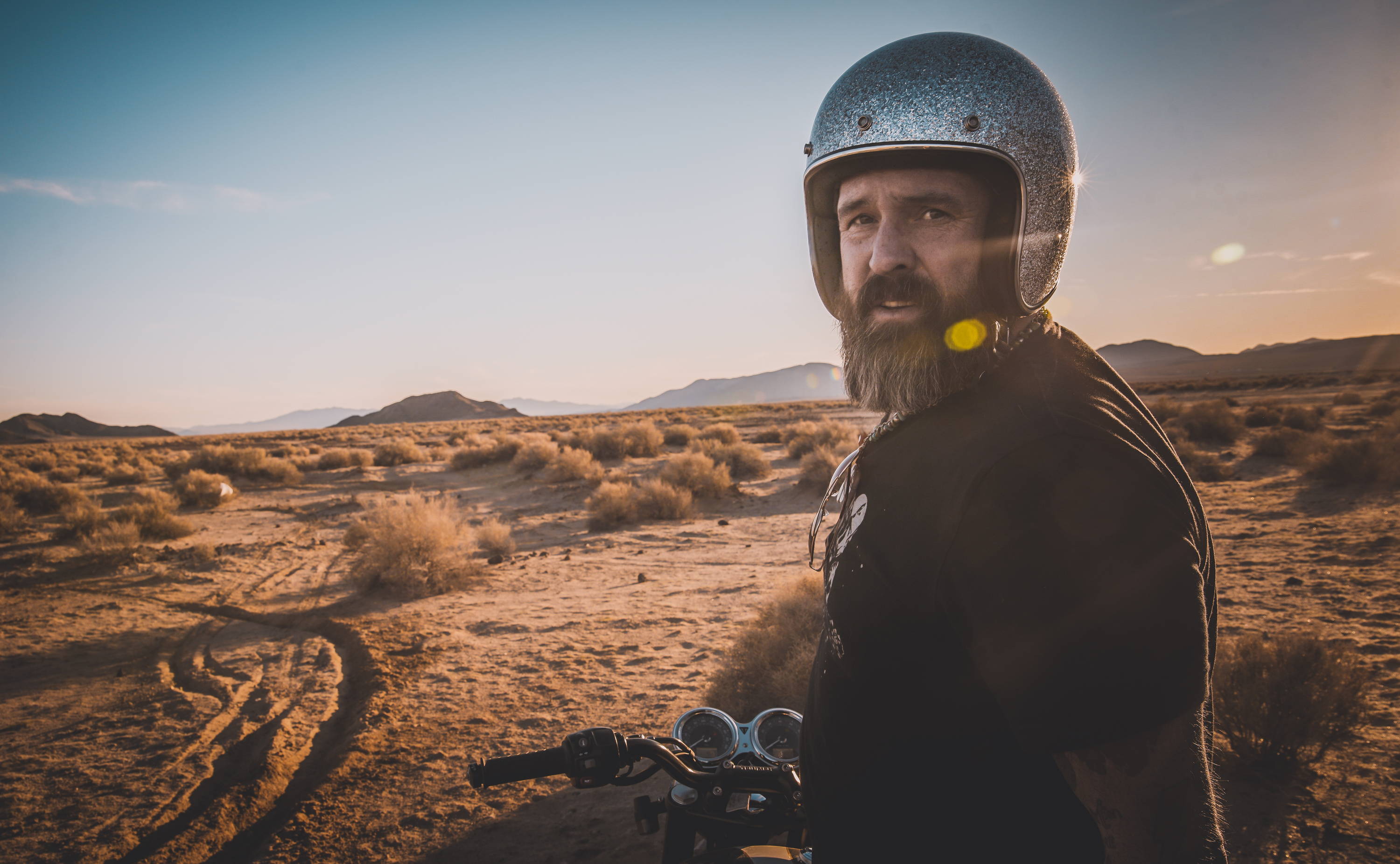 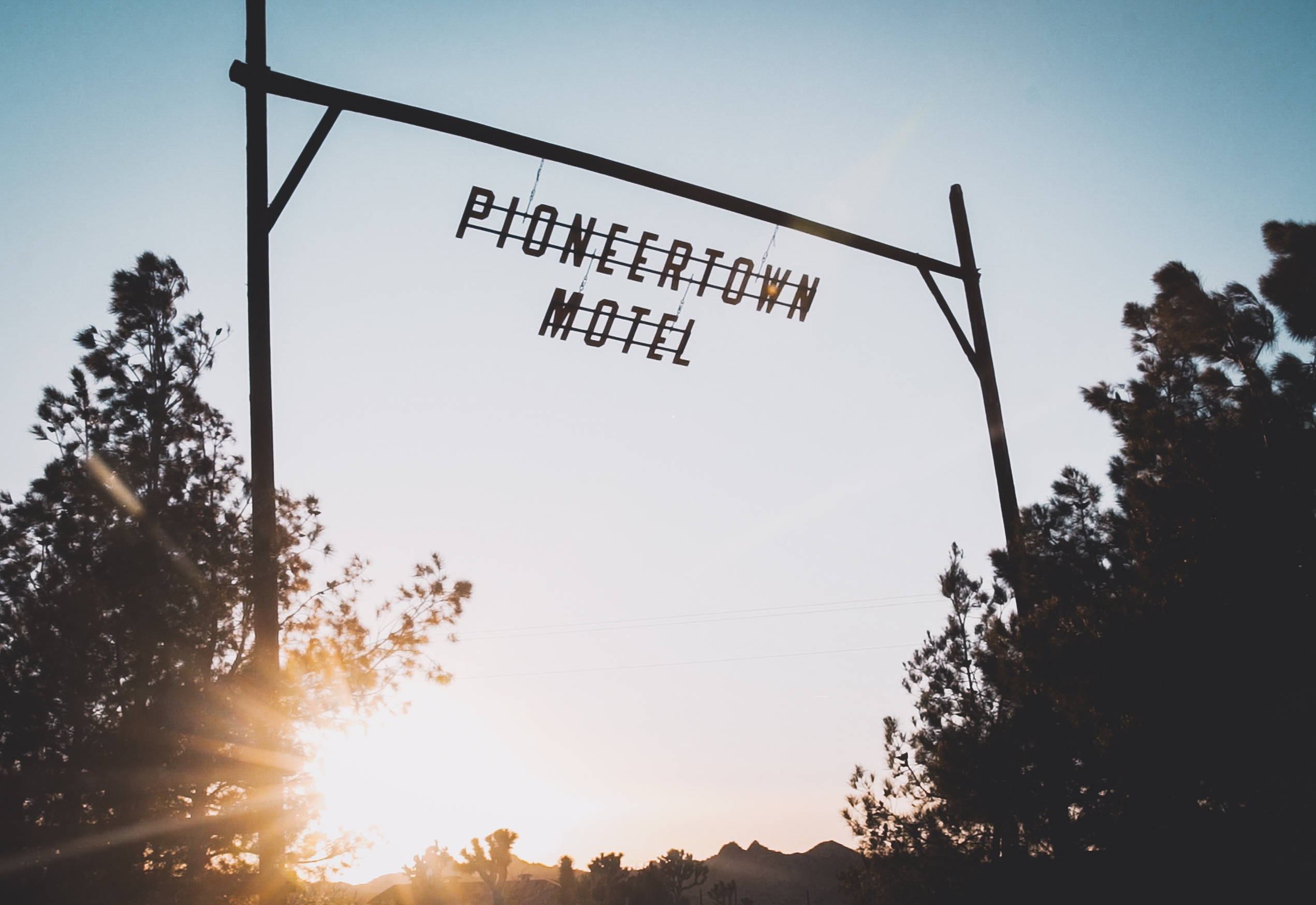 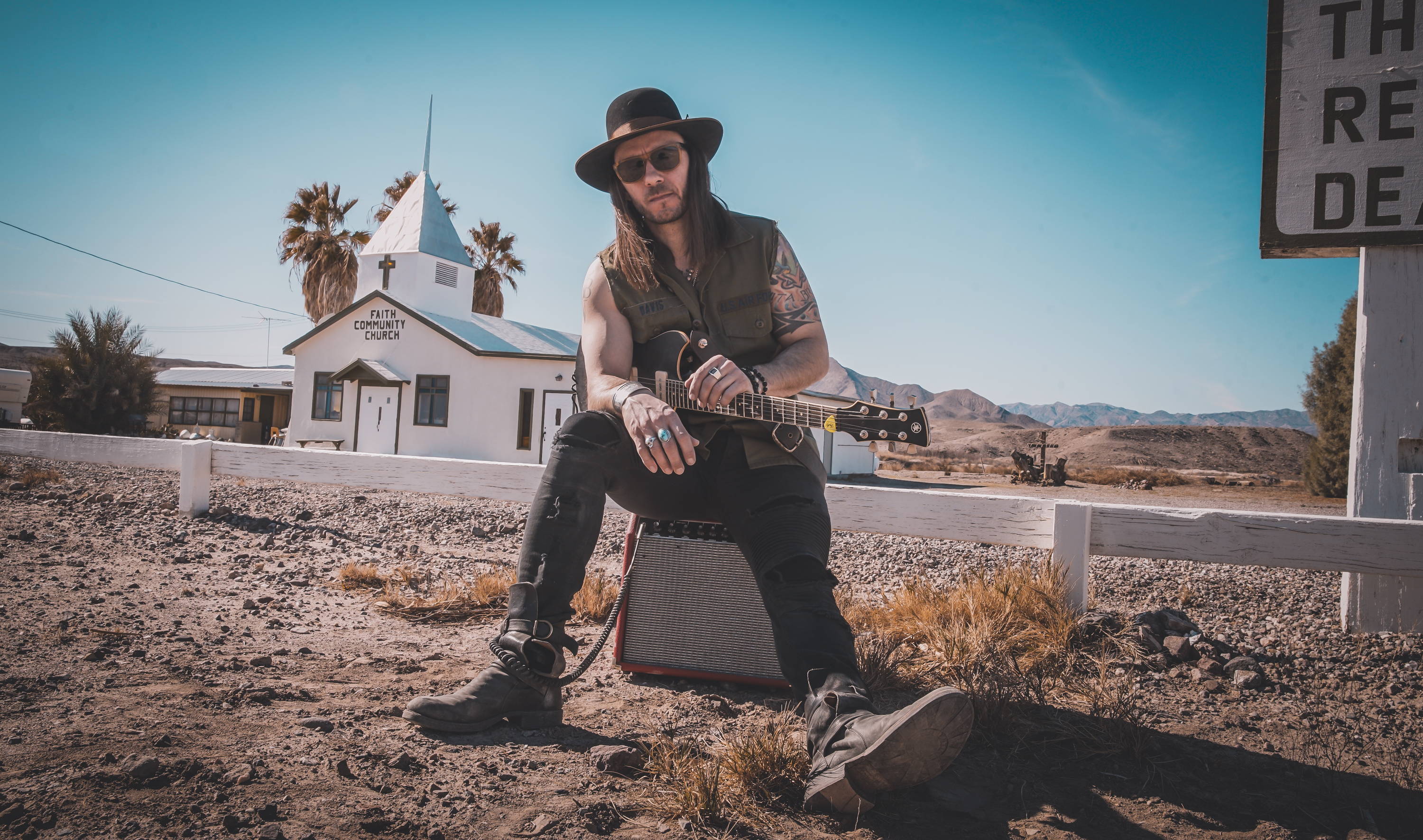 We rose early on the second day and shook off the fog from the evening before and were greeted with even more cold and more wind. This time we outfitted for the journey dawning our layers and leathers and prepared for battle with the elements as we headed North through the Mojave Reserve towards Las Vegas. Despite the crushing wind blowing us sideways at times I was awestruck at the scenic beauty as we drove on deeper into the wasteland. Like an endless scene from your favorite movie we rolled past the hoodoos and cactus and Joshua Trees at a furious pace, using all the daylight we could to make miles in the warmest parts of the day. We stopped at one point at the half way point to eat at a Truck Stop touting the “Best Burgers in the Universe” And THEY WERE! We asked the locals for a place to ride and were escorted out to a place where we could leave the pavement for a while and put our bikes to work in the sand! The sand was deep and heavy and the roost flew ten feet in the air as we tore thru the back country. I found out the hard way that the back roads are not ALL sand as I high sided my four hundred and fifty pound motorcycle across the trail when I hit some hard rock covered in sand! The result was a bruised ego, a squashed tail pipe and broken mirror. I was reminded that even though my scrambled T-120 CAN be taken off road it is NOT a dirt bike! And that extra weight will throw you for a loop if you are not careful. After some great pictures and laughs we decided to cut our day short and stopped in Primm Nevada instead of Vegas. Right on the California Nevada border Primm boast three large Casinos and a wild looking rollercoaster. We managed to get into the restaurant right before close and had the place to ourselves save for one other weary gambler. As fate would have it we were talking about first aid and the Heimlich maneuver when Travis looked across the restaurant and yelled out “SIR ARE YOU CHOKING” to all our surprise at the table and the staff the lonely gambler was choking badly! Travis and I ran to the man’s aid, I proceeded to administer first aid until his blockage had cleared while Travis directed me yelling “Hit him again Clay”! until the man was breathing again. Zach gave him a gentle belly rub until he settled down and we shook hands and headed back to our rooms in utter disbelief an the series of events… 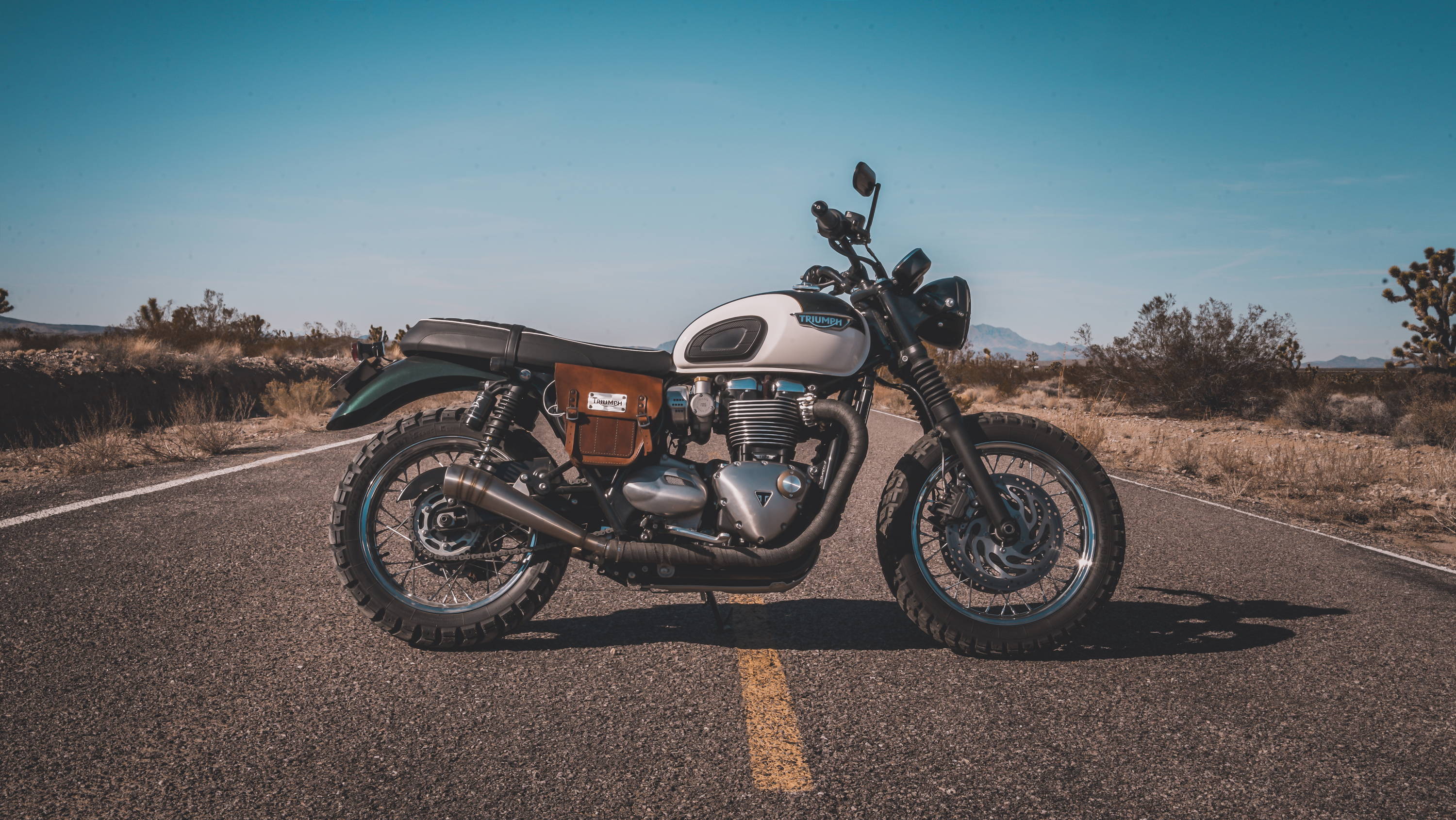 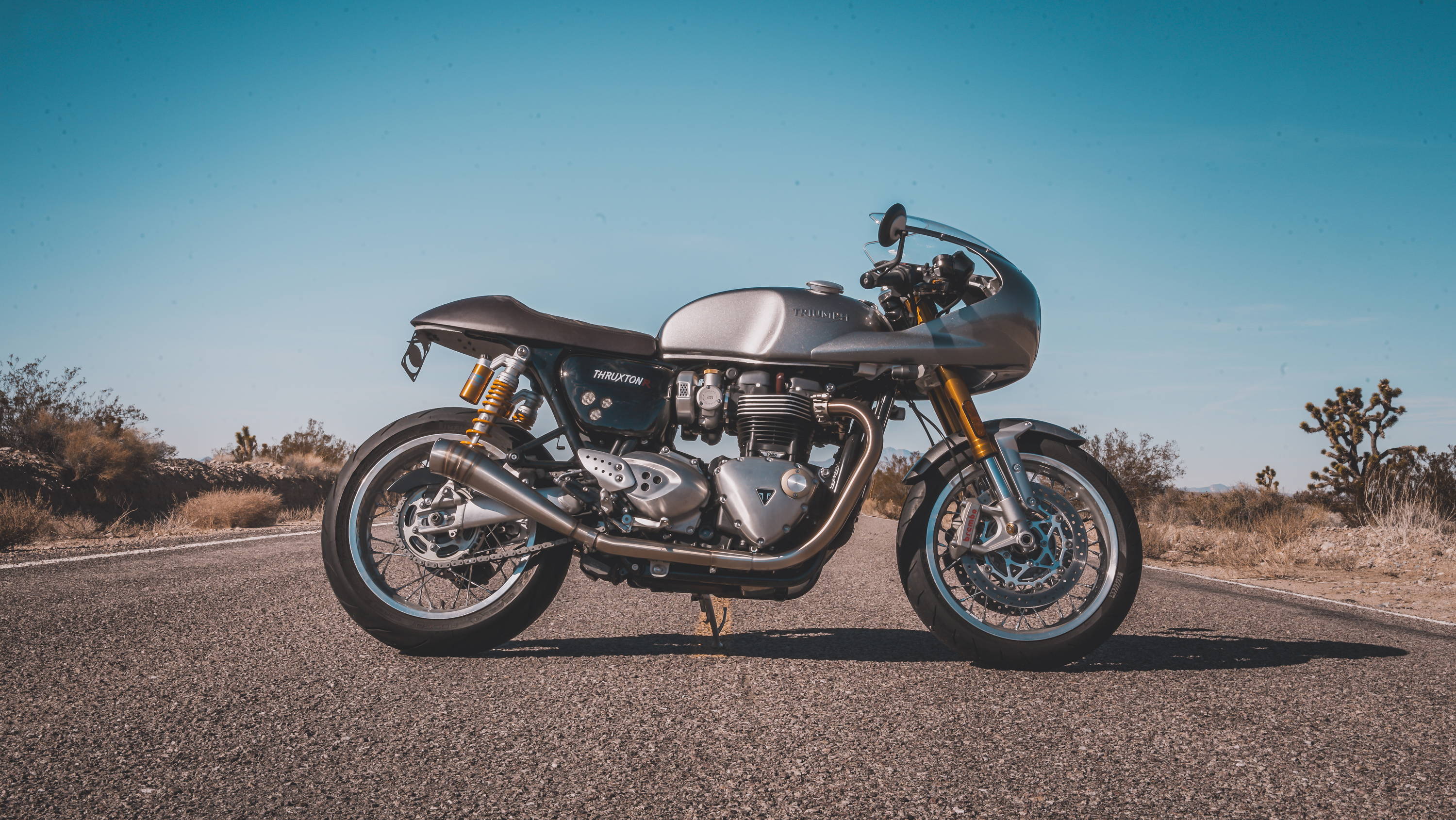 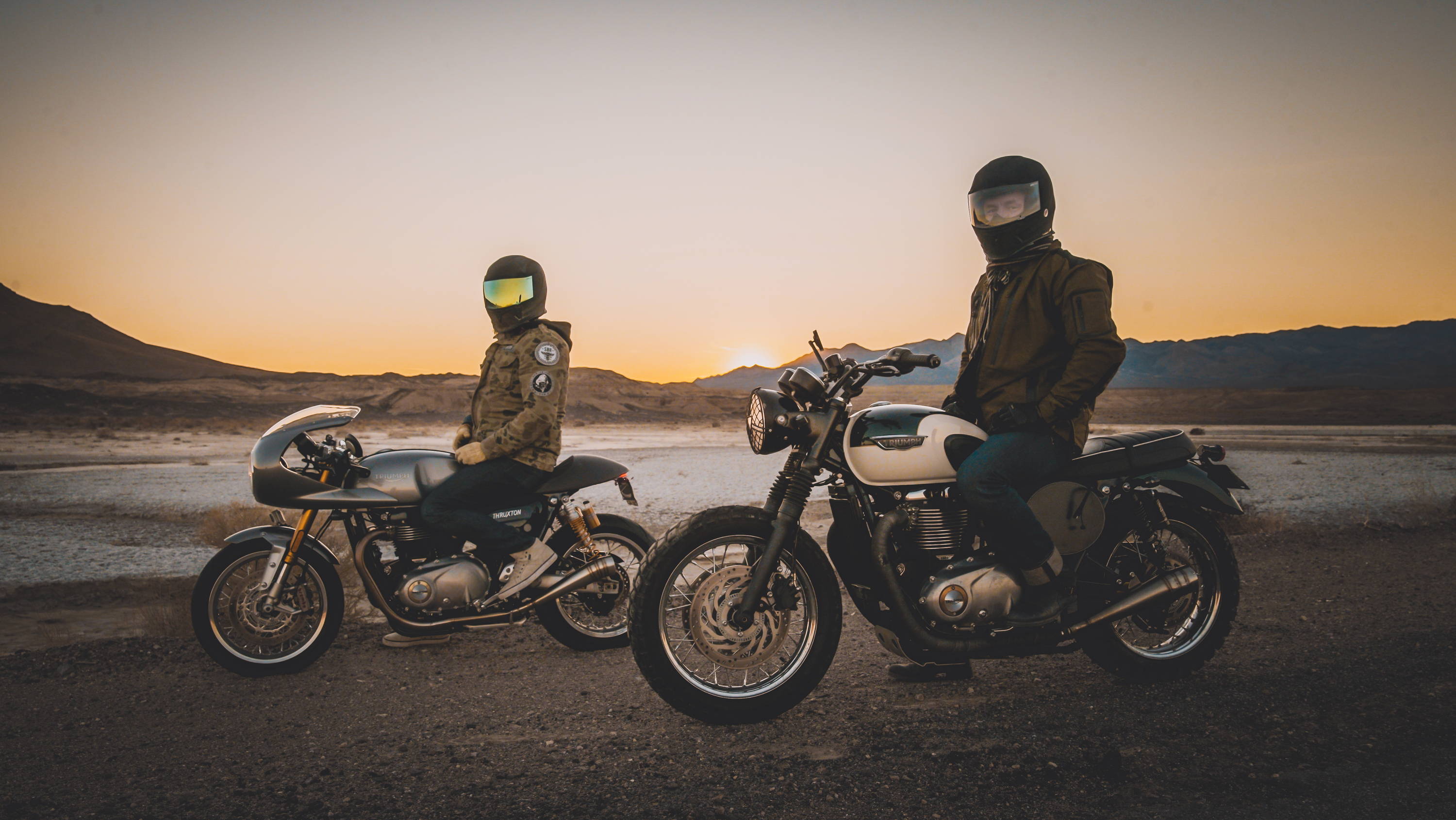 As if the Desert was smiling on us for our random act of kindness the night before we woke to the hot sun blazing down on us and the wind completely gone! We peeled off our layers and raced out onto the highway west into Death Valley. Often touted as one of the hottest places on the planet it did not disappoint. The heat was palpable as our pasty Canadian skin burned in the Sun and dried our bones. Any vestiges of roadside civilization slipped away as we passed through Baker and past the military no fly zones and into the vast expanse of dry lake beds and sand dunes. At one point we dove over a hill to expose a five mile stretch of empty road across what could have been an Ocean a million years ago. The spirit of Devil weed took hold of our throttle hands as we opened up the British Customs 1200 Thruxton and T-120 for all they were worth across the lake bed. Speed blurring the lines on the road the bikes barked between hi rpm shifts until the rev limiters kicked us back into reality. As the sun began to set on the third day we made our way to our Air BnB titled only as the Villa Anita. In a place called Death Valley where people usually go to escape and not be found this was like an Oasis. Billed as a living art museum it is owned and run by a group of artists, and could only be described as a hippie art commune. We were greeted by two beautiful angels of the desert and I wasn’t sure at first if I was being lead to salvation from the heat or into the Hotel California. But we were quickly put at ease by all the amazing patrons at the Villa and the incredible vibe and food. We ate and drank and walked the five acre compound covered completely in paintings and sculptures and creativity. We sat by the fire and reminisced with our new friends as we looked out at the stars. We were now as deep as we would be in the California desolation and we could feel the magic seeping into every part of our bodies…..and also the sand in every crack and crevasse … 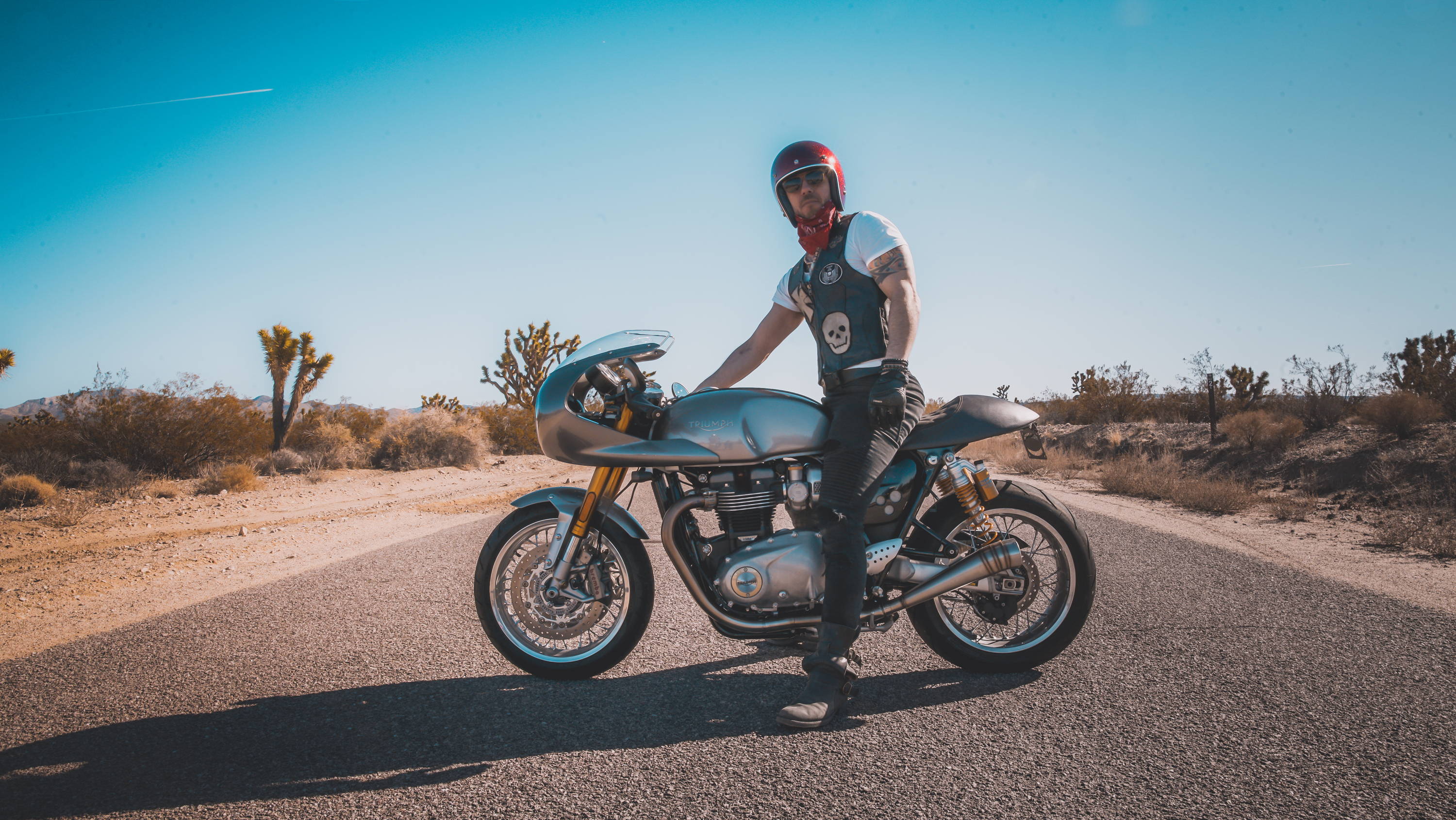 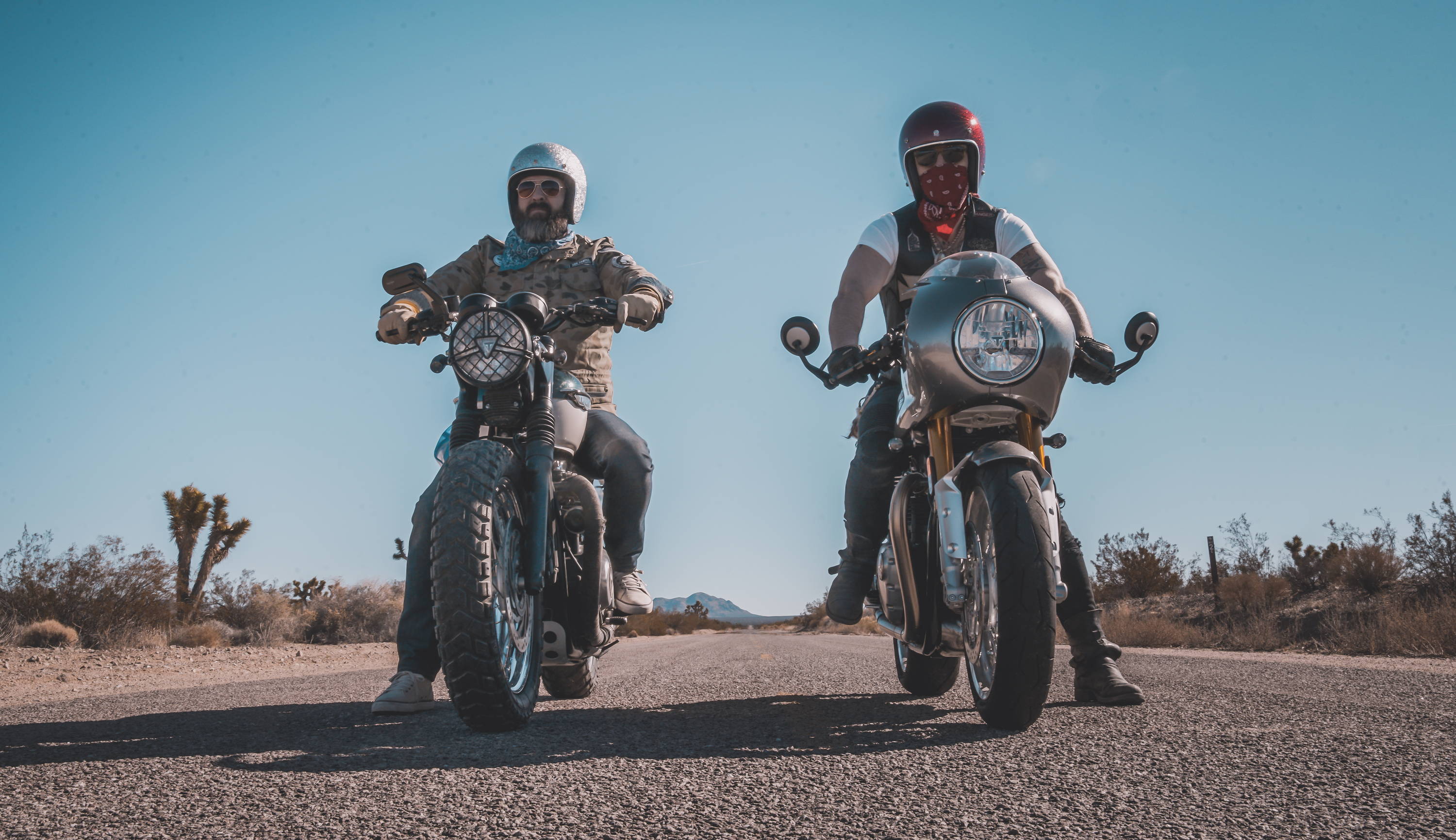 On the last day of our journey we bid our new friends and the desert Oasis farewell and road out into another windless day of dry heat. The temperature was a beautiful 75 degrees and I could only imagine rolling through here in the dead of summer with temperatures reaching one hundred degrees! The air seemed to suck every ounce of moisture from our bodies and I was so grateful for every water stop along the way. We were sidetracked once again by an open expanse of Sahara like sand dunes with bikes and quads and buggy’s rolling all over them. We couldn’t resist one last opportunity to put the scrambled out T-120 to task so we pulled off and tore into the desert flesh one last time till we had sand in every part of our bodies and the clutch was slipping from the heat. We cooled the bikes as the roads wound back south and we could almost feel the shift in the air pressure as we approached the coast and the call of the Ocean. Santa Monica was our final destination on the map. And as the water and beaches called our names we rolled on the gas hard the whole way. We were dry, we were dirty but most of all we were transformed. The Ocean would make us clean and replenished us but the desert was deeper than that now. It was under our skin, in our bones. Our eyes could see farther, our spirits could reach higher our throttle hands stronger and just like the young Mojave braves we had achieved a higher state of consciousness…we had found our Motorcycle Mojo. 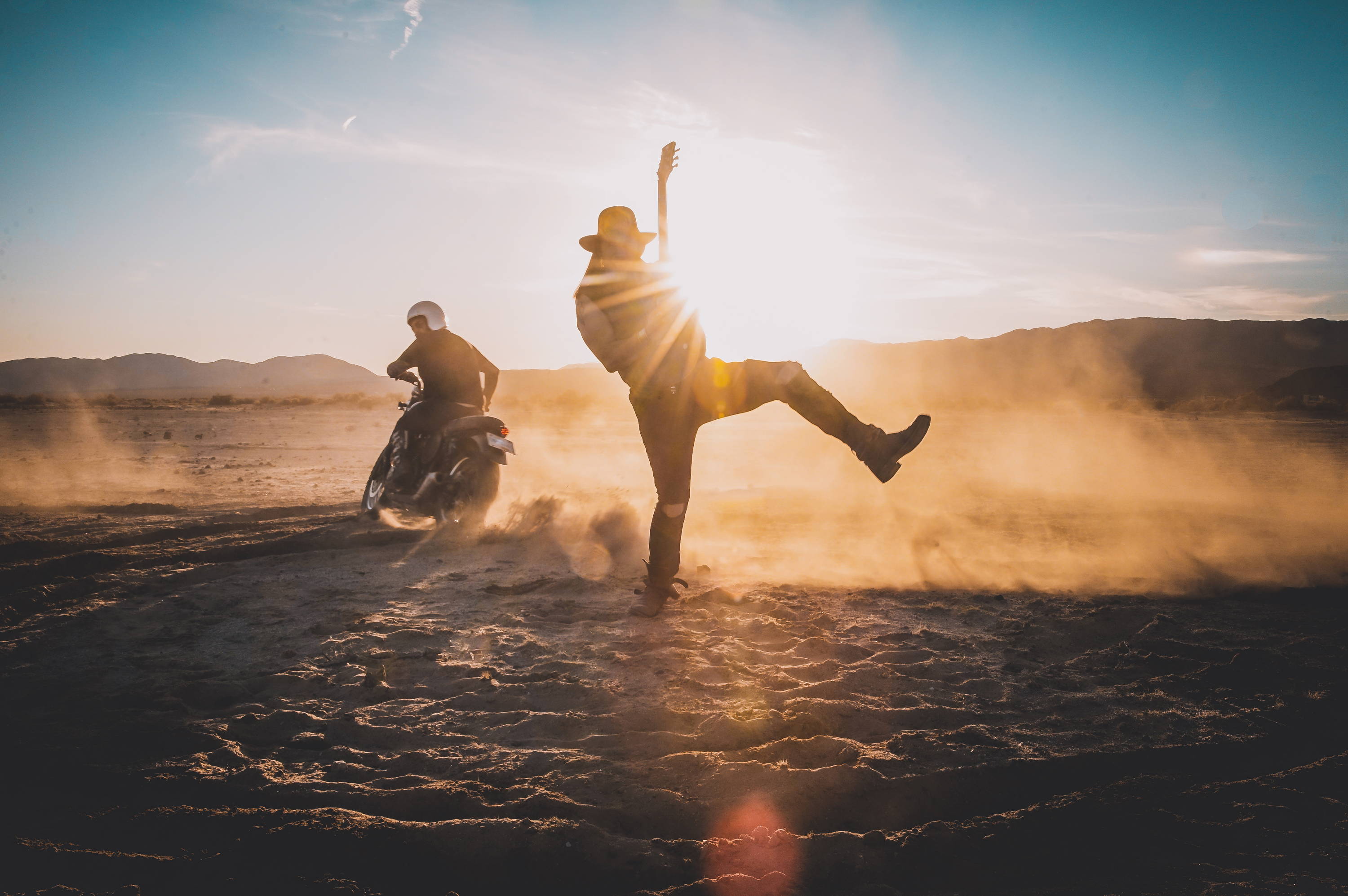 Clayton Bellamy is a multi award winning singer songwriter with The Road Hammers and a life long motorcycle enthusiast.